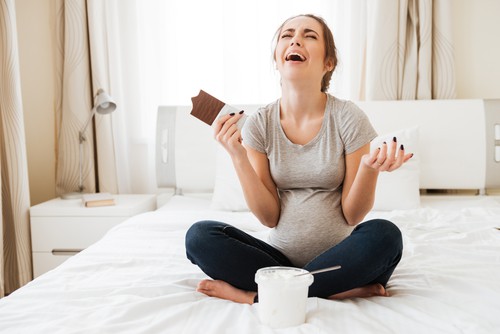 Pregnancy can be a funny old thing.

You can never predict how it’s going to go for you.  Even if you have been pregnant before that’s no guarantee of what is likely to happen during your next pregnancy.

If this is your first pregnancy then I can tell you that possibly at some point you will probably have some weird pregnancy craving that you simply have to fulfill.

I know we’ve all seen it in the movies before where the woman wants McDonald’s at 3.00 am in the morning and while that is kind of strange it can get a whole lot weirder than that and not just with food either.

Weird pregnancy cravings can hit you at any moment and they are not to be sniffed at because to a pregnant woman it’s like an itch that just needs to be scratched.

Let’s take a look at some of those weird pregnancy cravings, if we can avoid them and why we get them in the first place.

What Is A Pregnancy Craving?

There are many different forms of pregnancy cravings most of which we know are related to food but that is not always the case.

Pregnancy cravings can come in many forms, smells being one of them. Yes, it’s possible to crave a smell.

When I was pregnant with my second baby I craved a new car smell.  It just started out of nowhere and I couldn’t get it out of my head.

When you have a craving it’s as though you need to get hold of that thing and have it by any means necessary.

When its a pregnancy craving it becomes even more important to you.  That might come in the form of beef stew on ice cream or chips with jelly.

No matter how weird it might sound its what is important to the pregnant woman at that moment and time.

Not all pregnancy cravings have to be as extreme as jelly and chips and to be fair I haven’t actually come across a woman who wanted anything too bizarre and for most women, it’s usually something that pops into to their head that they just have to have like a particular chocolate bar before they can go to sleep or something like that.

So if you haven’t had the weirdest of pregnancy cravings there is nothing wrong with you, its perfectly normal.

Why Do Pregnant Women Have Weird Pregnancy Cravings?

It’s not known why some women get such strong pregnancy cravings but it could be attributed to the changes in hormones and just the texture or flavors of particular foods.

During pregnancy hormone levels can rise and fall so rapidly all over the place that it can leave a pregnant woman not knowing what she even feels or wants.

As well as having cravings at this point you can also get aversions to certain things too.

Aversions and cravings can come in many different forms during pregnancy.

How Early In Pregnancy Can You Get These Cravings?

Most pregnant women tend to start feeling cravings just after the first trimester in pregnancy but honestly, it can happen at any time.

You are probably more likely to notice it after the first trimester because that is when you are more focused as to what is happening to your body as it begins to change.

1. The Need For Dirt

Believe it or not some women simply crave dirt when they are pregnant.

Not necessarily eating it because not only is that gross but it could be particularly harmful to both you and your baby.

Literally the smell and feel of dirt is all some pregnant women want.

2. Fruit Salad But Not Really A Salad

While pregnant with our first son my wife craved fruit for every meal/snack. Beef stew with a banana cut into it, tuna fish with apple slices, etc. It was…interesting to cook for her back then.

With my son, I craved carrots. Fresh, earthy, sweet carrots. It was an insane addiction. The ends of the carrots littered my car like cigarette butts and the tips of my fingers started looking suspiciously orange

it ended soon after he was born.

5. Is There Such A Thing As Too Much Pie?

With my eldest, I craved Scotch pies. They are not a health food. It’s basically a cheap mutton pie that you can get everywhere in the part of Scotland I lived in then. By the time I went on maternity leave, I could have given you a review of every Scotch pie selling establishment in town.

This person also tried to convince their husband that they needed all their carpets at home changed because it was time for a change but it didn’t work.

This same person is not me.

When I was pregnant I craved mangoes, mangoes by the ton.

I used to send my husband out to buy as many as he could then he would have to carefully dice them up for me into containers.  For some reason, if I cut them myself I couldn’t eat them.

One day he came home and told me he couldn’t find any anywhere and that they were out of season.

You have never seen a grown woman cry the way I did that day.  It was as though someone had just delivered me the worst news of my life.

I went to bed in tears.

Pregnancy cravings can be completely weird but sometimes they are just normal too.

You may not even get any cravings at all and that’s also normal.  Pregnancy is completely unpredictable so what you could crave this time might not be what you will crave then next time you are pregnant.

If you are craving things that are way off the weird chart be sure to check it out with a doctor beforehand to make sure there is no danger to you or your baby and that you are not deficient in any area.

What’s the weirdest pregnancy craving you have ever had?

10 Weird pregnancy symptoms you should be aware of

10 Pregnancy myths that will get you thinking

How to overcome morning sickness

Previous Post: « 12 Pregnancy Things To Buy After You Find Out You’re Pregnant
Next Post: Symptoms of Poisoning in a Dog »